When a tourist comes to Japan for the first time, they’ll notice a peculiar sight. All across Japan, there seems to be an over-population of traffic guards doing seemingly pointless jobs.

He or she is usually buckled up with a clean, blue worker’s outfit with neon safety straps, a helmet, and is proudly brandishing a glowing wand that they mechanically wave in the air to direct pedestrians and traffic. 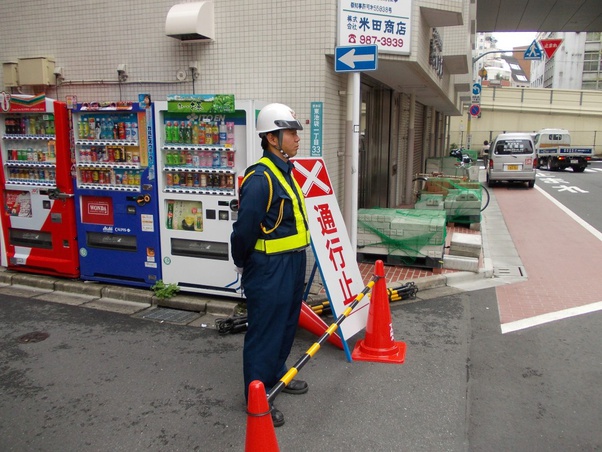 Or this guy, standing in front of several orange cones and a clearly marked construction zone (that is barely blocking the road) and waving a big orange flag. 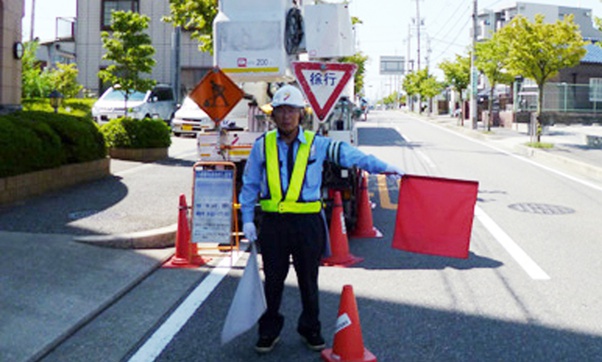 ‘Wait a second,’ you say. ‘There’s a guy out there at the road construction site next to all of the clearly marked signs. But then there’s a real human being next to him doing the same gesturing. Why do you need that? He’s not embarrassed by that?’

No, he’s not. But to those unfamiliar with Japanese work culture and society, this job may seem particularly low-level or demeaning. What value and meaning can this worker truly get from this job? What’s the point?

One company that employs construction and traffic workers puts it simply: “our goal is to keep the city safe.”

And safe it is. The clear signage combined with a human touch will guarantee that, as you blindly walk through the city texting on your phone, you will never veer off into an unsafe direction near a construction site. Rain or shine, they’re out there, making Japan a safer place.

The dignity of work

The average Japanese person won’t think twice about this or find it the least bit odd. In Japan, there is a strong sense of dignity attached to work. You do your work, and you do it proudly, no matter what.

But when you see somebody being lazy — the aloof waiter that forgets your order, a sales person that can’t answer basic questions, or the university professor who is going through the motions of recycled course material that they never bother to update — there is an inevitable feeling of, “Really, is that the best you can do?”

We have more respect for the traffic worker that makes a tiny salary for a seemingly pointless job and stands on the corner of the street directing traffic with a smile on his face than we do for the manager at a “reputable company doing important work” who’s droopy-eyed and just floating by without the slightest hint of zeal or enthusiasm for his job.

Not because either job is better or worse, or more or less important, but because of how they approach their jobs. It makes all the difference. This dignity can be achieved through taking pride in one’s work, even if those accomplishments are modest by another person’s standards. Dignity can also come from feeling connected with a team or believing in the importance of a cause.

Dignity can be threatened by mismanagement inside of a company, constraints on your autonomy, and overwork. Despite these issues, it’s still possible to persevere in the face of adversity and do well without loving your job fully — in fact, this struggle might be a prerequisite to great achievements.

As Mark Manson puts so eloquently, “to not give a fuck about adversity, you must first give a fuck about something more important than adversity.” Like doing high-quality work, taking pride in your job, and showing up consistently, day in and day out.

This is not to suggest that you should stay in a job you hate, but rather, that by doing a good job, you are able to maintain your dignity as an individual, and thus take the higher ground in the situation — regardless of what is being imposed upon you.

“Your work is going to fill a large part of your life, and the only way to be truly satisfied is to do what you believe is great work. — Steve Jobs

Check out my new book to get first hand insights from people living in Japan, featuring over 30+ exclusive interviews.

Click here to receive updates and a free copy once it’s released.